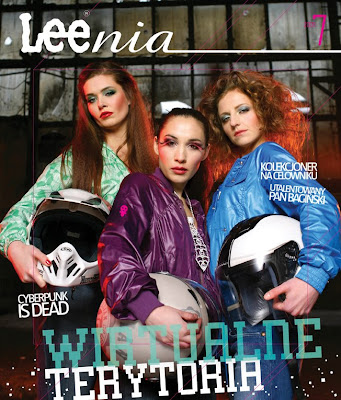 Finally, the spring/summer issue of Leenia (#7 2009) made for the Lee jeans brand. The theme this time is virtual reality and cyberspace. And as usual I had to reinvent the layout completely. (Did I mention that I love to design this mag?) On the cover are three fifths of performance collective Babaryba. The shoot was made by photographer Justyna Cieślikowska and special fx designer Łukasz Huptyś in an abandoned factory on the outskirts of Warsaw. I used a free font called Athens Classic for all the headlines (made by Soixantedeux). The magazine is distributed in Lee stores and cafés in Poland.

The table of contents. 100% magenta – my favourite colour – is a dominant in this issue. The large numbers were used in an earlier issue of Leenia and are made from stencil graffiti I have found in a carpark.

Cool stuff you can buy. Everything here is a bit retro. On this spread I introduce a frame that continues on most of the pages in the mag. I wanted it to look a bit techie, like an old instruction manual. And I love the green...

In this section we present famous people who are all called Lee-something. Alan Lee is a well known illustrator who has made book covers for Tolkien and loads of other fantasy authors. I made the small portrait.

Lee Bul is a female artist from Seoul, Korea. She fits into the cyber theme of this issue as she makes incredible cyborg sculptures using high-tech materials.

An exhausting interview with talented Polish animation artist and film director Tomasz Bagiński. One of his short movies – The Cathedral – won a British Academy Film Award and was nominated for an Oscar. To illustrate the text I used frames from some of his productions.

In each issue a designer is invited to reinvent Lee's clothes. This time up it's designer/artist Paweł Kozłowski, aka Swanski.

This text entitled "The End Of The Future" is an attempt to define the influence of cyberpunk on music and fashion. The conclusion is that cyberpunk – as a fashion statement – is dead. Still it's good to read about bands that I used to admire as a kid like Skinny Puppy, Kraftwerk, Einstürzende Neubauten, Laibach and Front 242. I love the dirty greenish background here.

Starting in this issue is an event spread with upcoming concerts and festivals in Poland. I kept it as simple as possible: black and white pics + pink text.

The fashion shoot for this issue is titled City Of Women (like the film by Fellini) and is inspired by films such as Blade Runner, Sin City and Kill Bill. Everything is shot on location in an abandoned factory. Everyone was freezing their butts off and you can actually see snow on the floor on some of the pictures. The worst part (for me) was removing all the goose bumps...

A cool text about collectors of ephemera and vintage junk, a hobby I enjoy myself. I'm particularly proud of the opening illo. I used thumbnails found on internet auctions.

A low budget shoot of Lee clothes. I used a friend as model and had to draw the background myself. The design is obviously inspired by the movie TRON.

Sylwia Restecka made the opening illustration for this text about VR in films and pop culture. The second spread is illustrated with frames from TRON. I actually watched the film for the first time since 1982 (which makes me very old) and I have to say it's still damn good. The special effects are amazing. Most of them were made without the use of computers!

The closing spread and the credits. End of line.